Harry Bertoia was born in the small village of San Lorenzo, Friuli, Italy in 1915.

He travelled to Detroit, USA with his father at the age of 15 to visit his brother and ended up making the USA his home, where he lived for the rest of his life.  Upon taking residence in America, his name was changed from the Italian ‘Arieto’ to the Americanised ‘Harry’, which is the name we all know him for.

Harry Bertoia was an artist, sculptor and designer, designing jewellery and, perhaps, more well known for designing the ‘Diamond Chair’ and Bird Chair for Hans and Florence Knoll of Knoll Inc. – still well-renowned today for their furniture making.

All of Harry Bertoia’s furniture designs are still made under licence by Knoll today.

Perhaps what he is not so well known for outside his worldly recognition of his furniture designs, are for his Monoprints and Tonal or Sonambient Sculptures; sculptures constructed of rods of metal, which also create sound.

In the 1950’s and 60’s Harry Bertoia received many commission requests for his sculptures, many of which were for corporate and major institutions, such as the General Motors Technical Centre in Michigan, with his work being exhibited at the 1958 Brussels World’s Fair.

He also worked in conjuction with some of the major architects of the 1950’s and 60’s, such as Eero Saarinen, Max Abramovitz and Charles Eames.

Harry Bertoia is one of the most influential and important designer’s, sculptor’s and artist’s of the 20th Century and his work is still much celebrated today.  He brought a new way of thinking to constructed metal art through his design and creation of his wire furniture, sonambient  sculptures and other works.

Harry Bertoia suffered from cancer in his later years, but died peacefully at his home in 1978. His grave is marked by a huge, one tonne gong. 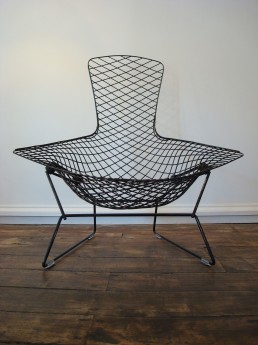 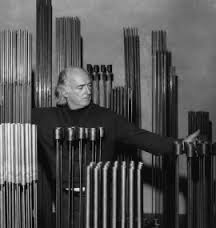 Harry Bertoia pictured with a selection of his Sonambient Sculptures